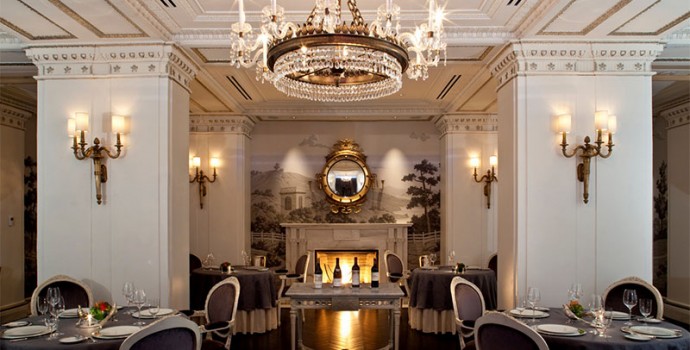 A Very Fine Feather in Plume’s Cap Plume at The Jefferson, DC Awarded a Rare Forbes 5-star Restaurant Rating This feather is a big one – VERY big. To understand the magnitude of the honor of receiving a five-star rating from Forbes Travel Guide, it helps to take a step back for a moment. Forbes […]

This feather is a big one – VERY big.

To understand the magnitude of the honor of receiving a five-star rating from Forbes Travel Guide, it helps to take a step back for a moment. Forbes doesn’t bestow those stars lightly. It’s not to be taken for granted that any restaurant in any given city will achieve highest marks in a given year. In fact, not in the past thirteen years has a restaurant in the nation’s capital earned the highest esteem of Forbes’ discriminating incognito inspectors; last year, Plume at the Jefferson, DC – and the hotel itself – were delighted with their very respectable four stars, and in rarified company, too.

But in this 2013-2014 season, the elite guide has deemed Plume fully worthy of all five stars, its very highest rating, one of only 32 restaurants in the United States awarded the Five Star recognition — and the only one in the nation’s capital. According to Forbes, “Forbes Travel GuideFive Star restaurants offer a truly unique and distinctive dining experience. A Five Star restaurant consistently provides exceptional food, superlative service and elegant decor. An emphasis is placed on originality and personalized, attentive and discreet service. A gracious, warm dining room team attends to every detail of the meal.”

These are all qualities on which Plume at The Jefferson, DC prides itself. The elegance and discretion of this fine historic hotel is legendary in Washington, as borne out by the long list of neighbors from nearby 1600 Pennsylvania Avenue who continue to patronize the dining room.

According to Philip Wood, Managing Director of The Jefferson, DC, a rating of Five Stars from Forbes Travel Guide is an extremely special accolade. “I’ve been in this business long enough to know that there are a great many ‘honors’ out there, and only a handful, really, are worth noting. For a restaurant to be awarded Five Stars from Forbes signifies a truly great accomplishment, and we direct all the credit to Plume’s extraordinary staff, who made it happen.”

Between the inspired classic cuisine of award-winning chef Chris Jakubiec, the masterful dining room orchestration of Food & Beverage Director David Bueno, and a cellar of astonishing quality presided over by Wine Director and Advanced Sommelier Michael Scaffidi, dining at Plume is bound to be memorable. With an inventive imagination and an unerring palate, Jakubiec pays attention to the dishes that graced Thomas Jefferson’s table at Monticello, and to his remarkable kitchen gardens that supplied it. Bueno conducts the team with grace and polish, ensuring service that is personal, discreet, and seamless. Scaffidi, formerly of The French Laundry, is also a perfectionist in his field, but a playful one, who delights in serving vintages that Jefferson may have encountered and enjoyed – or completely new offerings that he might favor today, were he dining with you.

Forbes asserts that its system of Star Rating, beyond rewarding a restaurant’s excellence, “takes the guess work out of travel planning and establishes a global benchmark for luxury travel.” Singling out Plume at The Jefferson, DC with its award of five stars, Forbes marks it as the best restaurant in Washington, DC.