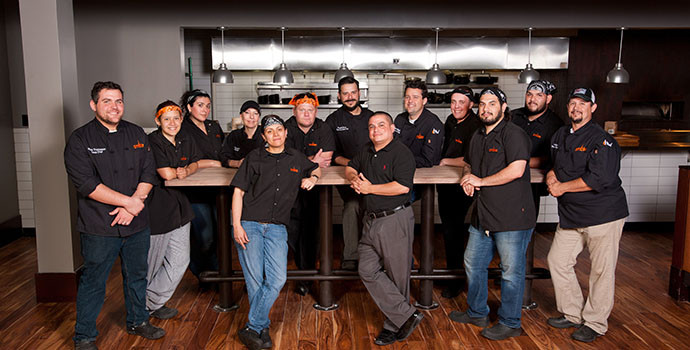 Where There’s Smoke By AMANDA CONLEY When long time restaurant veteran Brian West decided to open up a new restaurant in the city of San Antonio, people were excited. “Smoke” is described as an urban barbecue eatery with plenty of influence from other BBQ cities and other regional favorites. Chef West described opening night as […]

When long time restaurant veteran Brian West decided to open up a new restaurant in the city of San Antonio, people were excited. “Smoke” is described as an urban barbecue eatery with plenty of influence from other BBQ cities and other regional favorites. Chef West described opening night as “great”, and that things were just a little crazy… but, praises his team’s effort and most importantly stated that “everyone was really happy with the food.”

Smoke’s inventive menu has BBQ favorites from around the great BBQ states, with nods to the best in ‘cue from other states. Chef West had to admit that while Texas is king with beef, when it comes to whole hog the influence is from North Carolina and Memphis, Tennessee. Working with famed hog cooker Myron Mixon on the fine art of “whole hog BBQ”, Chef West praised his “brothers and sisters in the South” on their proficiency with whole hog… a style that never quite took off in Texas, which is still considered famed cattle country. Chef West even spent time on Mixon’s ranch while he was researching and learning about the various styles of BBQ before embarking on his own solo venture with Smoke.

The menu at Smoke is varied, plenty of other BBQ influences have been pulled… everything from brisket, to hog, to smoked short ribs, all crafted with the knowledge and skill Chef West has picked up over the years. When asked about his favorite menu items he was quick to embrace the brisket from the barbecue menu and the “Sexy Meatloaf” from the Dinner Menu, which is served with in-house pickled okra that Chef West called “absolutely delicious.”  With a name like Sexy Meatloaf, it’s definitely worth a try.

Chef West is also a former instructor at the Culinary Institute of America, teaching for 3 years in San Antonio. He found the experience rewarding and loved giving back, but enjoyed sharpening and honing his skills as well as teaching the students. “If you really want to absorb something, try teaching it.” West says. His time teaching allowed him to slow down a bit in his cooking career and really “soak in this craft.” His advice to culinary students is very sound… “just take it low and slow, like the barbeque at Smoke.” Emphasizing that culinary school is the time for students to find their culinary voice and identity, encouraging them to hone their skills while reminding them that there’s no rush when it comes to their culinary careers.

Chef West then embarked on another chapter in his culinary journey, leaving the Culinary Institute for a cast member position on the popular Food Network show “Restaurant Impossible”. He was able to work very closely with the noted, “fiery” Chef Robert Irvine in helping to turn failing restaurants around. Working with Chef Irvine, Chef West did confirm that he can be exactly as he comes off on television, “when he’s {Chef Irvine} in action, he’s very aggressive, very forward and he pushes people.” Chef West credits the mentorship and pressure as taking him to the next level. His proudest moment on the show was a rare admittance from Chef Irvine when he took Chef West aside and said “’you’ve made such a difference on this show for us. Your skill level is just unprecedented.’”  The moment is still very important to Chef West, saying that despite his age, he’s still being mentored.

Chef West, a Culinary Institute graduate himself, credits his cooking style to his Texas roots, but is influenced by his restaurant years and the local flavors of the city of San Antonio. Chef West is very optimistic about the food scene in San Antonio, stating that we’re in a “Golden Era of Texas Cuisine” and hailing San Antonio as the most up and coming food scene in the nation. Very high praise from a very talented chef.

Chef West is a family man as well, bringing his talents from the professional kitchen home to his family. Household favorite dishes include fried chicken, pulled pork (started at the beginning of the day for a delicious meal by dinner time) and crafting homemade baby food for his young son with an emphasis on what’s fresh. Chef Brian West is a restaurateur with immense skill and talent and Smoke is sure to please palates from BBQ fans to brunch supporters and those ready to enjoy in a new age of Texas dining.